Wayne State has been an innovative urban center of higher learning since 1868, when a group of Civil War doctors envisioned a better world through better medicine. Since our founding as the Detroit Medical College, we've grown to become one of the 50 largest public universities in the United States, offering nearly 350 degree and certificate programs through 13 schools and colleges.

1868 – The Detroit Medical College, forerunner of the School of Medicine, was established.

1881 – The Detroit Normal Training School, forerunner of the College of Education, was established.

1917 – The Detroit Junior College, offering a two-year program in general education, was established in 'Old Main' and later developed into the College of Liberal Arts.

1924 – The College of Pharmacy was organized.

1933 – The College of Engineering and the Graduate School were established.

1933 – The Colleges of Liberal Arts, Education, Engineering, Medicine and Pharmacy, and the Graduate School were united by action of the Detroit Board of Education into a university organization, temporarily called the Colleges of the City of Detroit.

1934 – The name Wayne University was adopted, taken from Wayne County and, ultimately, from General Anthony Wayne.

1935 – The School of Public Affairs and Social Work was organized. In 1950, it became the present School of Social Work.

1937 – The Law School, established in 1927 as Detroit City Law School, became part of the university.

1945 – The first doctoral programs were authorized in the fields of chemistry, physiological chemistry and education.

1945 – The College of Nursing, which began as a program in the College of the City of Detroit, became a separate college.

1946 – The School of Business Administration, originating in the College of Liberal Arts, became the 10th academic unit in the university.

1985 – The School of Fine and Performing Arts and the College of Urban, Labor and Metropolitan Affairs were established.

1989 – The name of the School of Fine and Performing Arts was changed to the College of Fine, Performing and Communication Arts.

1993 – The College of Science was established.

2009 – The School of Library and Information Science was created.

2011 – The Warrior football team made its first appearance in the NCAA Division II championship game.

2018 – The Mike Ilitch School of Business opens its new facility, located in The District Detroit.

To thee, our Alma Mater,
Homage we bring.
Brave hearts raise grateful voices
Thy praise to sing.
Young art thou, young and strong;
Renowned shalt thou live, and long;
Honors to thee will throng-
And Fame to thee cling.
We laud thee, Alma Mater,
Guardian of Right.
Thou art our guide, our mentor-
Thy name shines bright.
Keep Learning's light aflame,
And hold Truth a sacred name,
Honor, thy steadfast aim.
All hail to thy might.
- Nicholas Stanley Oates '29

The Green and Gold of old Wayne U.
flies over the field today.
Our hearts are light for with our might
A vict'ry is on its way.
The team is strong, for them we'll cheer,
Wayne U. will march along.
And at the end our voices blend
in Wayne U.'s vict'ry song.
- Don Gragg 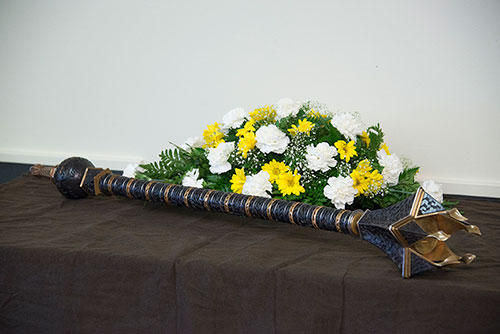 The Academic Mace of Wayne State University is a ceremonial scepter whose features relate to the ancient maces used by universities worldwide. Though a symbol of the highest ideals of humankind, many maces exhibit the main characteristics of their most ancient relative: The medieval battle-mace or war club.

The university's 51-inch mace consists of layers of carved ebony held in place by a tubular shaft. By tradition, it is carried by the sergeant-at-arms and occupies a prominent place before those who attend and conduct the commencement ceremony.

As the battle-mace lost its usefulness as a weapon, it began to appear as a ceremonial staff in processions of royalty, magistrates, and church or university officials. During the commencement ceremony, it serves as a symbolic weapon to protect and proclaim the ideals of harmony, truth, justice and learning.

The Academic Mace of Wayne State University is a gift of Sara and Melvin Maxwell Smith. A 1939 graduate of the university, Mr. Smith was for many years a generous contributor to the artistic enrichment of campus life. The Academic Mace was designed and created in 1984 by the late Phillip Fike, professor of art at Wayne State until his death in 1997.